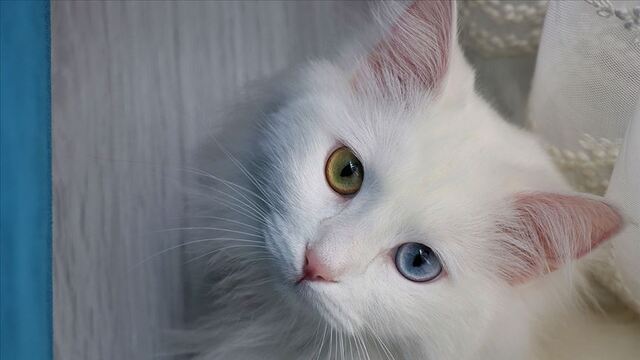 The lively Van Cat, who can’t stand still with its playful and curious character; It is in the first place among the cat breeds that are wanted to be looked after as a domestic cat. Due to its high demand, its price is quite high. If you do not have the opportunity to buy it, you can find the opportunity to own a Van cat if you search enough. Due to the decrease in the number of periods, it was forbidden to be sold outside of Van. With the increase in the number of studies carried out at Van Yüzüncü Yıl University, they were allowed to be sold again. But the sale of cats abroad is still prohibited.

Van cat’s appearance; resembles a small lion. Its tail is abundantly hairy. It walks by keeping its tail straight while walking. It is very noble in appearance. The Van cat has spread to our country from the Van Sea Valley, which is located in our city of Van, where it takes its name. The characteristics of the Van cat are as follows.

The most striking feature among the Van cat character traits is that it is warm-blooded and friendly. He’s pretty good with people. The most distinctive characteristic of this furry friend is its loyalty to its owner. Especially if he is adopted as a pup, he adopts the family he enters and shares all his love with the family. The Van cat is an emotional cat. Their feelings are very strong. He takes care of his family members individually. Who feels happy and who is unhappy. As soon as he notices unhappy family members, he pays close attention to them.

Van cat; Compared to other cat breeds, it loves to play with water. Even if it is a small puddle, he jumps into it and starts playing games. For this reason, you should not choose very wide waterers. Medium-sized cat drinkers will be more comfortable. It is not a very loud breed. When he wants to tell his owner something, he prefers to meow. Because it is a social cat breed, it gets along well with other pets.

The Van cat is a type of cat that is not very difficult to care for . Since its fur consists of long hairs, it needs to be combed 2-3 times a week. You should use a wide-range cat comb, which you can gently comb through without plucking its long hairs . It is necessary to carefully clean the area around the eyes. Since the hair around the eyes is long, it is suitable for holding dirt. As with any cat, veterinary checks should not be interrupted.

The Relationship of the Van Cat with Children and Animals